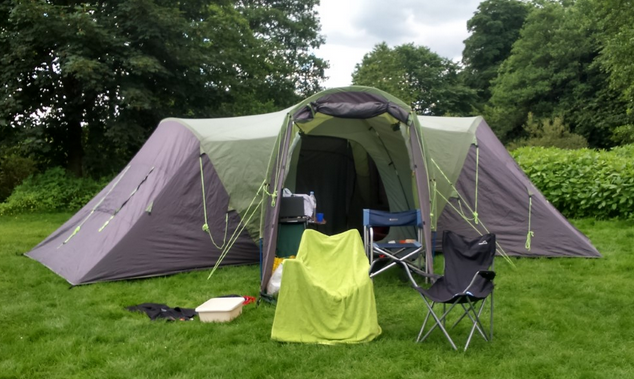 We used to camp a lot when the kids were little but one year something happened that almost put our camping days well and truely behind us.

Due to the vast amount of camping equipment needed for a family of 6 we acquired one of those huge ugly grey car roof boxes and from May to September we tended to leave it on top of the car as it didn’t seem worth the hassle of taking it off and putting it back on repeatedly.

The year of our “camping night of hell” we were not blessed with good weather. A grey drizzle had set in just as we’d  arrived at the campsite  and it got steadily heavier over the course of the weekend. The farmer who owned the campsite  took pity on us and our friends and let us use his sheep barn as cover when we had a BBQ on the Saturday night. We all ate well, especially Edward who back then couldn’t resist having as many burgers and sausages as he could manage. 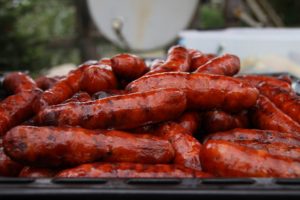 As the evening drew in we gave up waiting for the rain to ease off and clutching our waterprrofs tightly around us we made a dash back to our tents each of us hoping to find a dry sleeping bag to settle into for the night.

At around 1am I woke to hear some groaning coming from the boys pod and I called out into the darkness to check that they were OK.

As I did so I heard an almighty eruption accompanied by another groan. I leapt out of my sleeping bag, fumbled around for my torch and staggered across the tent to the boys pod to discover that Edward had, for the first time in his life, dihorreared in his entire sleeping quarters.

I woke Nick up.

Nick took Edward to the distant shower block in the now torrential rain. I chucked the ‘soiled beyond hope’ sleeping bag and roll mat out of the tent knowing I’d have to deal with those items in the light of day and got on with the task of attempting to A) locate the remaining poonami and B) clean it up using half a pack of baby wipes and some sheets of kitchen roll whilst trying not to disturb Seb who had somehow managed to sleep through the whole incident.

I had just finished making another ‘bed’ with a blanket and a spare sleeping bag when Nick and Edward returned from the shower block.  Edward said he felt much better and so everyone settled down again, hoping that the worst was over.

About an hour later I heard another groan coming from the boys pod followed by some frantic movement in the tent.

“Are you ok Edward?”

I wasn’t at all convinced and with good reason;  after hearing another almighty eruption I sprang to my feet and unzipped the boys pod to discover Edward hovering his bare bottom over the washing up bowl trying to catch (but failing) the waterfall of diarrhoea gushing from his shaking body. The liquid poo hit the bottom of the bowl with such force that it sloshed over the side spilling onto the groundsheet narrowly missing Seb’s angelic little face.

I managed to yank the still sleeping Seb and his sleeping bag out of harms way just in time.  After alerting Nick we resumed clear up operation number 2 (literally). Nick and I assumed the same roles as before and eventually we got Edward and the tent passably cleaned up, although by now the tent stank to high heaven. I don’t think I’ve ever gagged so much in my entire life nor  have I ever so greatly regretted not having to hand a pair of latex gloves. Thankfully that was the worst of it, although poor Edward made several return trips to the toilet throughout the night accompanied by Nick or me – and all through the night the rain did not cease. Not once.

In the morning we decided the only course of action was an immediate return home to the luxury of an indoor toilet, shower and the blessed washing machine.

A week later Nick drove our car into a multi-storey and completely destroyed the roof box by crushing it against the low ceiling – I still don’t think this was entirely accidental although Nick claims it was an honest mistake. Either way neither of us felt that sorry to see it go.

Once Edward was fully recovered I asked him why he had told me he was OK that night.

He just said, “Mum, I thought I had everything under control.” and then we both got a fit of uncontrollable giggles. 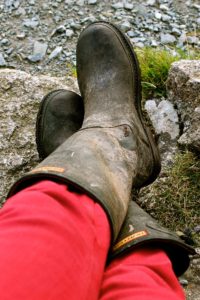 It may amaze you to know that we do still go camping but it’s now limited to about one weekend a year and never too far away from home – After all you never know when you might need to make a hasty retreat back to the comforts of home.