“Are we nearly there yet?” is a familiar cry that anyone who has travelled with a young child will recognise and dread.

Like most parents we’ve experienced that cry too, but turned up a notch.

Are we more than half way there yet? Are we more than 3/4 there yet? Are we more than 7/8ths there yet? ….. I think we stopped at 63/64ths by which time I had a headache and everyone was begging Edward to stop asking these questions. The thing is knowing exactly what was happening and what was about to happen has always been important for Edward – it makes him feel more in control and helps him know what to expect; it keeps him calm. He also likes precision and detail. My other son Seb, who is not autistic, is a lot more laid back and has spent the vast majority of his childhood being happily bundled here, there and everywhere without needing to know exactly why and when things were happening to him. My girls fit somewhere in between the extreme positions of their brothers.

Edward likes things to be accurate. When he was little and extremely interested in dinosaurs he announced that he would need all his dinosaur books to be replaced on January 1st. 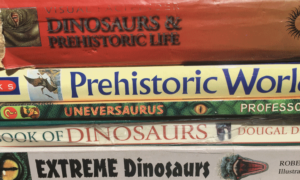 On questioning he explained that his books were full of data about the number of years since various dinosaur species had become extinct. This data would be wrong if we didn’t get the next edition. His books told him that the T rex had died out 65 million years ago and he wanted his books to say that T rex had become extinct 65000, 001 years ago after another year had passed by. He thought the books were full of lies because they were not accurate enough; he wanted them to be exactly right to the year. It got us into interesting conversations about how precise we need to be and what units of measurement are appropriate in different situations.

Afterall we never use seconds to describe our age and we’d only use months to describe the age of a very young child after which using years is suffice.

This desire for precision has shown itself in conversations of the most mundane nature such as this oft-repeated exchange:

Edward: “I know that. Why are you telling me this?”

Me: “I want to make sure that you go to bed soon.”

After a long silent pause with Edward making no apparent move to respond.

Me: “When are you planning to go to bed?”

We don’t do this conversation dance anymore. This is partly because he’s got older and I don’t tell him when to go to bed very often (I’m usually in mine before he’s in his) but also because I’ve learned to ask the better question, “When are you planning to go to bed?” since this is the one that gives me the information I need.

If the answer to this or similar questions (“When are you planning to finish your computer time?”) produces an answer which I’m happy with it means we avoid getting into a completely unnecessary argument loop which is always a plus!

My son has clearly intelligible speech, an extensive vocabulary and a faultless command of grammar but despite this he’s experienced lots of occasions where what appears to be a simple question has flummoxed him due to the fact he doesn’t intuitively understand what information is being sought.

If you ask my son a question which can be answered with a straight “yes” or “no” then that’s what you’ll get.

If you want more specific information from him you’ll have to craft a better question.