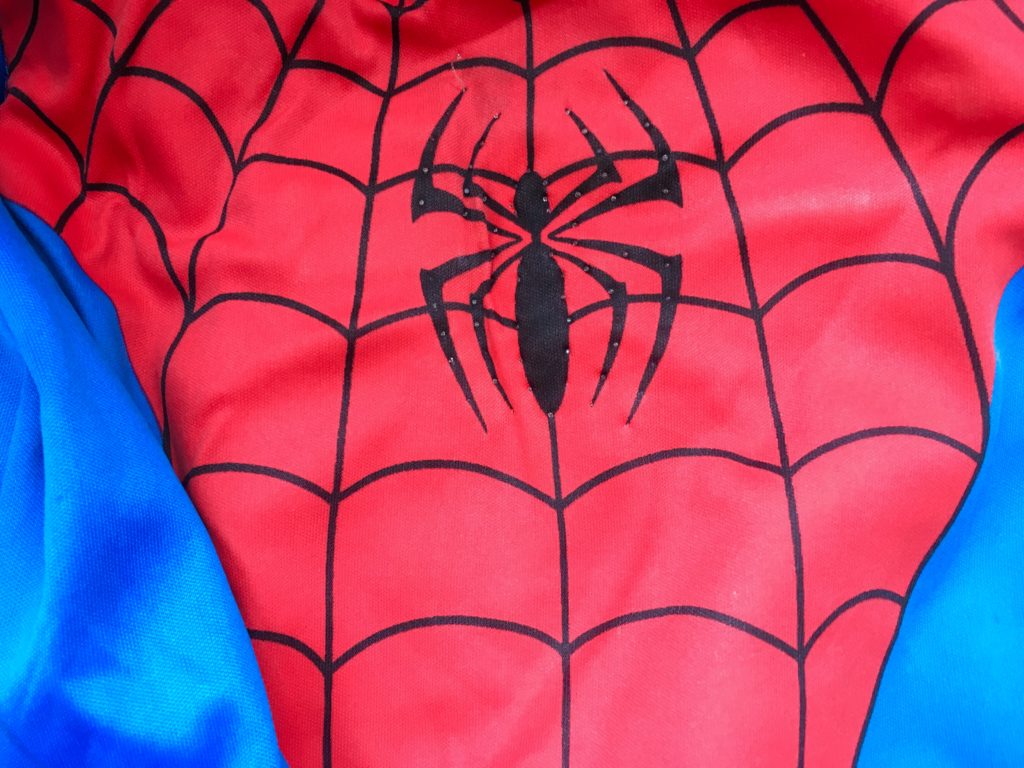 I am not a creative person. On the Venn diagram of craft skills, costume making and Lynne only very minimal overlap occurs. I used to dread the letters from primary school informing me that all children should attend dressed in their favourite character from a book for world book day.  These letters could send me into a state of despair which was soon replaced by a mood of rebellion.

An extremely creative friend of mine used to make complicated home-made outfits for her kids to wear at all the different school events – the festival parade, world book day, comic relief, children in need – you name it an outfit was lovingly created. I like to think it was because, unlike me, she was a stay at home mum who had time to make these things, but the truth is I just couldn’t really be bothered with the hassle knowing that the end result would be disastrous. I once attempted to help Leila make an Easter bonnet. We decided to paper mache a balloon, cut it in half and paint it brown; The idea being that it would look like half a chocolate easter egg. It took us days and the end result could have been titled, “turd on a head”. She would have done a lot better if I’d left her to her own devices!

The night before each dreaded dress up day I would find myself scrambling around in our dressing up box (thank God we had one) and my kids would just have to make do with whatever  we already had. The costume choice was both eclectic and extremely limited. My kids could basically transform themselves into a  sheep, princess, spiderman, pirate, wizard, Aladdin or a cocktail waitress. If none of these outfits fitted the bill we were stumped. 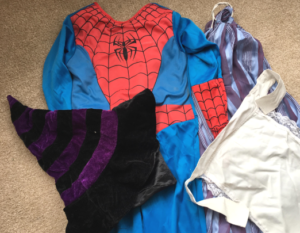 One year Edward’s class were asked to come into school dressed as someone they admired. At the time Edward decided that the only person he admired was Einstein. I know that some parents will have the skills to make a blond-haired blue-eyed  8-year-old boy look like an old professor with hair sprouting in crazy directions from head, ears and nostrils. I don’t.  I was saved from this creative nightmare thanks to my Godson who was in the year above Edward.

“He’s a very famous scientist – haven’t you heard of him?”

“No!  Don’t go as him, everyone will think you’re weird.”

This gave Edward second thoughts and he decided to sack off the Einstein idea, (which I was quietly glad about because quite frankly I didn’t see how I was going to achieve the “my son is Einstein” look). He rejected my lazy suggestion of going as Brian Cox (which would have meant him wearing non uniform and saying to everyone, “I’m Brian Cox”). As dress up day loomed ever closer on the horizon without a decision being reached, his stress levels rose, as did mine. None of our usual stock of dress up clothing was going to work this time. Like a lot of kids on the autistic spectrum Edward doesn’t like changes to usual routines, however with Edward if we know that something is going to be different from normal and we take time to let Edward know about it well in advance and explain exactly what he will have to do differently, he can manage well.

In the end I asked him if he would prefer to wear his school uniform and go as himself? He thought he would but he was very worried because the teacher had told everyone that they had to come dressed up as someone they admired. He didn’t want to break any rules.  I explained to the teacher that Edward was getting very anxious and stressed because he couldn’t think of anyone he wanted to dress up as. She told him he could come in his school uniform. Good call!

The night before the dress up day Edward suddenly had some inspiration and announced that wanted to go to school dressed as a computer, because he admired computers more than people!  If Einstein was a challenge this was certainly well beyond my capabilities! Some parents may be able to whip up a computer costume in 90 minutes, which was precisely how much evening I had left. I simply did not have the time, skills, resources or energy so I had to apologise and tell him he was going to have to go as himself.

He did and it was fine. In fact he wasn’t the only child in school uniform that day.

I do wonder about teachers who send these dressing up requests home.  Are they working parents themselves? If so, they must be those skilled crafty types who fail to understand that an outfit which they can knock up in an hour or two would be a life time’s achievement for us, the craft incompetents of the world.

If you are responsible for kitting out any kids for world book day I wish you the very best of luck!

11 thoughts on “Dressing up for World Book Day”