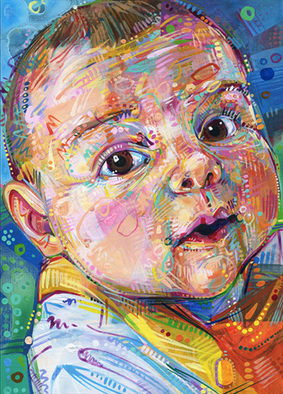 Sometimes we get hunches that things are not as they “should” be. Those niggling persistent thoughts that alert us to the fact that all is not well and that action must be taken. Action though takes a lot of energy so sometimes its easier to keep these hunches buried, tucking them away to be faced another day.

I didn’t officially know that my son Edward was autistic until he was 8 years old although I’d had my fair share of hunches for quite a long time before diagnosis day.

After a slightly scary labour Edward fitted into our family life incredibly smoothly in child position number two. He sat and crawled at around the right time, he loved having cuddles, he weaned easily and all seemed well.

His older sister Leila was born inquisitive; from day one her eyes were open and alert. She took in the world around her, always watching us intently with her dark brown eyes. Edward didn’t study us in the same way although he was really easy to look after and he seemed happy enough. We thought we were dealing with a very laid back, not particularly bright, much-loved bundle of baby boy. 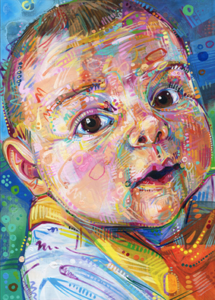 It was when he was around 18 months that I first had some hunches that my assessment of my son was way off mark. The following are some examples of early behaviours that alerted me to the possibility that Edward had autism.

Edward would often stare into mid distance and chuckle to himself. If I tried to stand in his line of vision I would seem to be invisible to him as he would just stare through me without any glimmer of recognition. Those moments were a little unnerving and when they happened we tended to awkwardly ignore them, especially so when we had visitors.

Then there was the finger waving. Occasionally I would observe him waving his fingers in front of his face. He loved this. Although I knew that this type of behaviour was common in autistic children I thought that if he was really autistic he’d be waving his fingers all the time, surely his random moments of flapping were pretty normal.

As a pre-schooler Leila had very disordered speech development and people struggled to understand her. Despite this she was an excellent little communicator. We always knew what she wanted and she was incredibly good at making her opinions known. At only 2 years of age she noticed some graffiti on a slide in the children’s play area and she exclaimed “bejiba doh” loudly whilst pointing at the graffiti with an extremely disapproving facial expression. This would have made no sense to anyone else but I knew that her word for anything to do with writing, reading or books was “bejiba” and her word for anything negative was “doh”. She was clearly telling me that there shouldn’t be writing on the slide. She was right.

Edward on the other hand developed a lovely range of speech sounds and could say lots of words but he just didn’t use them very much. It was always difficult to work out what he wanted or what he was thinking about. I just convinced myself that all was fine and that I was raising a more self-contained type of child.

Edward had an impressive ability to totally ignore his name being called. He did respond sometimes but not consistently. I  had his hearing checked a few times as I thought he might be deaf. His hearing was generally fine although he did have one short lived  bout of otitis media (glue ear). Despite being pleased with his hearing test results they left me wondering why he was so unresponsive towards me at times.

He used to get distracted by things that most kids would lose interest in quickly. He loved reflections and he loved water. Watching the water disappear down the plug hole at the end of every single bath was like a ritual for him. Looking intently at reflections in windows and shiny surfaces would render him unable to do or respond to anything else.

Because Edward developed good spoken language skills, engaged in imaginary play and eventually even started initiating conversations with others I managed to suppress my hunches for quite a number of years before seeking professional help. It was only when I had much more concrete evidence that his brain was wired differently that I took action to ask for an assessment. I have written about this here.

It’s recognised that early intervention is important for children on the autistic spectrum and so if you have hunches that your child is exhibiting autistic behaviours it’s worth talking to your Health Visitor, Speech and LanguageTherapist or GP about it.

It’s also a good idea to keep a journal about your child’s development and about any behaviours that have caused you concern. If your child goes onto have an autism assessment the professionals involved will ask you to recall, in as much detail as you can, the early years of your child’s development. If you are like me – keeping notes preserves memories which would otherwise blur with time.

If you are interested in reading more about the early signs of autism this is a good article:

Does my Child have autism? How to Recognise the early signs and symptoms of Autism

Remember hunches are worth paying attention to; don’t ignore them for as long as I did!

3 thoughts on “Early signs of autism”