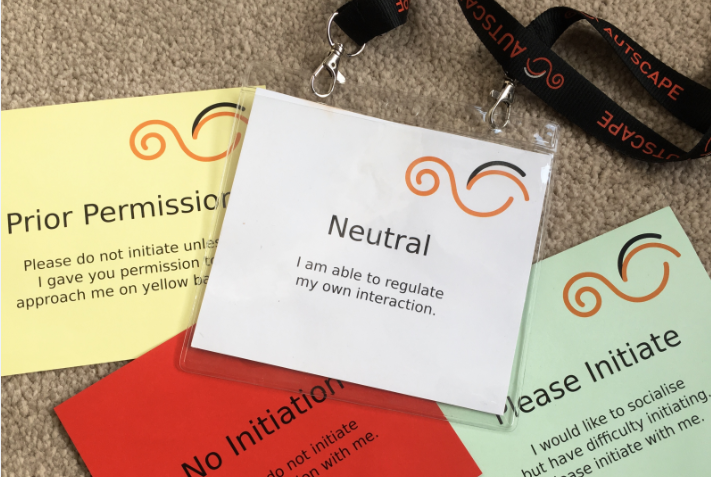 What would a conference be like if it was set up by and for autistic people?

I wanted to take Edward to a conference where he’d have the chance to meet a wide range of autistic adults and I also wanted to find out how an event set up by and for autistic people would compare with usual spaces.

The first noticeable difference was the high level of detailed information about every single aspect of the conference. There was a lot to read and digest. We received an electronic handbook by email a few days before the event and we were also given a  hard copy on our arrival. In addition we had a couple of talks about the key points of how the conference worked on the first evening. (I found myself reflecting on all of the times when Edward has demanded more detail about family decisions and processes and realised it’s not just him being difficult, he needs to know – knowledge and understanding help him stay calm.)

During the conference you had a choice of 4 different coloured badges to wear on a lanyard. Each colour indicated that you wanted a particular level of engagement from those around you.

White meant “Neutral – I am able to regulate my own interaction.”
Green meant “Please Initiate – I would like to socialise but have difficulty initiating. Please initiate with me.”

What a great idea – no need to try to puzzle over unclear body language and wonder whether someone wants to be talked to or left alone. I saw all colours of badges being worn (notably more red badges at breakfast time) and people generally respected other people’s badge colour.

Edward and I stayed on white mostly.

Another noticeable  difference was the amount of people STIMing. STIM is short hand for self-stimulatory behaviour and can be any kind of repetitive behaviour which is done for the sole purpose of delivering sensory input to oneself. (I’ve written about this before). At Autscape people  were actively encourgaed to stim if they wanted/needed to. They were invited to be themselves and reassured that this was indeed a genuine invitation which it was. People were mostly very tolerant of each other.

People were invited to do what they had to do to stay well although they were asked to try and respect other peoples needs when their was a conflict of interests.

Instead of clapping which can be difficult for some autistic people to tolerate due to their sensory processing differences we waved and flapped. So in a meeting if anyone said something which you strongly agreed with you could flap to signal your encouragement or approval. I’m used to being with Deaf people so I felt quite at home with the silent waving substituting hand clashing applause.

There were a lot of talks about autism and related topics during the mornings but there was also a lot of free time too. One room was set up as a games room with lots of jigsaws and the most geomag I’ve ever seen in one place. Some people played role playing games whilst others did jigsaws by themselves.

In the evenings there was usually at least one or two organised things going on. This included a glow stick party which was basically people playing with lights in a dark room for a very long time, a pub quiz with a difference (not really any questions on entertainment or sport but a whole heap of questions about star trek, science, technology, trains, harry potter and pirates (I didn’t see the last one coming either!)), a talent show, a fairly harrowing but extremely well performed play about mate crime which had an autistic actor performing as the lead character,  a cinema room and of course the bar.

Participants also had the opportunity to join a home group. The home groups had  8 -10 people in them and met twice a day before lunch and the evening meal. It was a chance to meet other people and I thought it was a good way to help people who had come on their own find and make friends. My group were really friendly and welcoming to Edward and me.

I think the thing that perhaps struck me the most was how accepting people were towards Edward.  As a 16 year old unfamiliar kid he was included and drawn into conversations by adults of all ages. There were all ages of people at the conference from young children to white-haired elders.  People who had known they were autistic for years and others who had only recently found out.

There were quite a lot of LGBTQ people at the conference and we were all given preferred pronoun badges to wear if we wanted to.

The vast majority of people at the conference were autistic; In fact I only met one other non autistic person and this meant that I gained a tiny glimpse into what life might be like if it’s not quite set up for how you are wired. (in my case it was exhausting and stressful at times even though people were kind and friendly towards me…. I might write more about this)

People I met at Autscape described it as being the highlight in their year, the place where they could truly be themselves. Somewhere where they felt accepted.

What do you think?

If you want to go to Autscape 2019 it is being held 12- 15 August in Hertfordshire. Unfortunately we can’t make it this year but I have a strong feeling it will become a regular feature of Edwards summers in the future.